The Riga City Theatre was opened on 15 September 1782. On behalf of Baron von Fittinghof, architect Christoph Haberland designed a project for the first capital theatre building in Riga. This classicist style house was built between the city wall of that times – Wallstraße or the current Richard Wagner Street at the very wall of the fortifications. An already existing warehouse was rebuilt into a theatre hall, but the building’s entrance and public premises were located in its newly built annex. During three centuries, this building has experienced many important events of theatrical and musical life in Riga.

The hall had three levels, including a balcony and a gallery. There is no reliable information about the number of seats in the theatre hall. However, the number of 500 – 600 spectators seems likely.

Richard Wagner was the Kapellmeister in Riga from 1837 – 1839, praised the stepwise rising arrangement of the seats, the recessed orchestra room and the semi-darkness in the hall during the performance. He implemented these architectural principles in the construction of the famous Bayreuth Festival Theatre. The Wagner Theatre in Riga has thus had a decisive influence on all modern theatre buildings of the 19th and 20th centuries.

For almost a century, this theatre, which housed drama, opera and ballet companies and troupes, was the centre of Riga’s cultural life. In its first season – 1782-1783 –, the theatre had 120 subscriptions. It was meant for a sophisticated audience as servants and other ordinary people were denied entry to the theatre. Already in the first decades of its existence, it kept pace with the best theatres in Europe, especially those of Germany, and countless European virtuosos had given concerts there. After the theatre was repaired in the 19th century, the real flourishing of opera began in Riga, i. e., in the second half of the 1830s, when in 1837– 1839, the young Richard Wagner was taking post as conductor there.

Theatre performances in the building were stopped in 1863, with the construction of the present National Opera House. The former theatre hall has been redesigned and rebuilt several times and did not survive till today. Much later, in 1988, the upper floor of the building, where the German Society of Riga “Musse” had been housed until the Second World War, was restored and the ballroom adapted for chamber music concerts.

The Wagner House (or Wagner Hall – Wagnersaal) – this historical house of Riga has been known by this name in the period from 1988 to 2007, when it housed an active concert hall on its top floor. However, the deterioration of the technical condition of the building led to the suspension of concerts in 2007.

The aim of the Riga Richard Wagner Society is to restore this important place for the history of European culture.

About the house architect 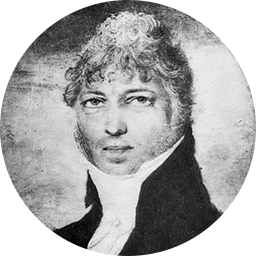 Christoph Haberland was born in Riga to a mason on 1 January 1750. Both his parents originated from Saxony. In early age he started to learn from his father. Later he traveled to Germany and as a journeyman studied in Berlin and Dresden. In 1777 Haberland returned to Riga, passed his exam of master craftsmen and was admitted in the mason guild. In 1778 he became the assistant of the Riga chief architect J.P. Leicht. When Leicht died in 1789 Haberland was appointed as his successor. He was chief architect of Riga until 1797.

Haberland was first to attempt the transformation of the medieval image of Riga according to the ideas of Enlightenment. His adapting many innovative ideas and a fresh look at architecture made Haberland one of the pioneers of classicism architecture in Riga. He designed about 20 dwelling houses in Riga, and some churches and manor houses around Riga and in Estonia. One of those churches, Katlakalna Lutheran Church, near Riga is considered his best work and is built as the Roman pantheon in miniature.

Christoph Haberland died on 7 March 1803 in Riga. He was interred in the Riga Great cemetery.